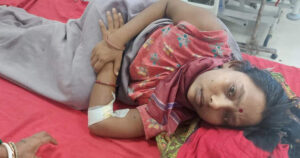 Imagine you going to the hospital to get something done specifically just to find out that the doctors did something totally different without her consent.

That’s exactly what happened to a lady in India who went to a private clinic to have her uterus surgically removed.

38-year-old Sunita Devi was suffering from a condition that required her to surgically remove her uterus and she was referred to a place where she could go get it done.

A while later, she had to be checked again as her health was taking a nose dive after what she thought was an operation to remove her uterus.

When she was taken to the hospital, the doctors found out that her kidney was missing.

According to the doctors, her situation is so extreme that she needs to be on dialysis everyday and if she misses even one day, she could die.

As for the bogus doctors that operated on her, after investigations, she found out that the clinic she went to wasn’t even a registered private clinic.