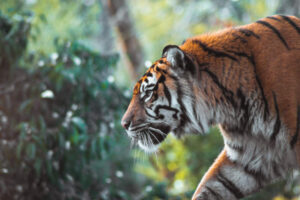 25-year-old Madhya Pradesh recalled her close encounter with death where she had to fight off a  full-grown tiger that was trying to take her 1-year-old son.

Madhya says that she and her son were just taking a stroll close by to a tiger sanctuary when a tiger leapt out of the bushes to sink his teeth into the boy’s head so he can drag the baby back into the jungle with him.

The mother said that when she noticed her son getting dragged away, she completely disregarded her own safety by running to the lion to attack it.

She fought one hell of a fight because her screams were heard by villagers that were nearby who then came to her rescue. They managed to chase the tiger away with some sticks.

Both mother and son had to be hospitalized, but the 1-year-old boy got off with very minor injuries.

Maddhya, however, had deep wounds on her back, arms, and even a couple of punctures in her lungs.

They’re both making progress as we speak, so here’s to them getting discharged from the hospital soon.