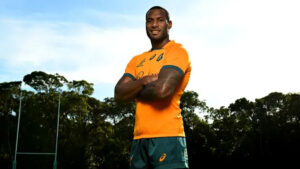 Fiji born and former Melbourne Storm winger, Suliasi Vunivalu is set to make his debut for the Wallabies against England this weekend.

Wallabies coach Dave Rennie has call Vunivalu “Mr. Fix It” with the hope he can bring in more firepower into their backline.

Vunivalu has been named in the bench while Samu Kerevi will be at number 12, Rob Valetini at number 8 and Marika Koroibete gets his third start on the blind wing.

The Wallabies will host England at 9.55pm Saturday.