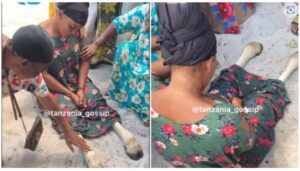 I’ve read some crazy stories on the internet, but never have I ever read one as crazy as this.

Now before we carry on, we just want you to know that this is FAKE NEWS!!!!!

Apparently, in a village somewhere in Tanzania, there who has allegedly turned into a cow.

So the rumour goes that she had snatched the husband of another woman and in a fit of rage, the wife of the man bewitched the lady and cursed her into turning into a cow (or at least half of her).

Another rumour says that she slept with a married man and her legs mysteriously turned into those of a cow.

The video of this incident has stirred up the internet a little bit and rightly so. With one viewing of the video, you’ll know instantly that it’s a hoax and it’s all fake, but obviously, some people are more gullible than others and all they need is some kind of visual evidence and they will be convinced that this is true.

Check out the video below.