A tourist who decided to ignore the law and climb a Mayan pyramid found herself facing the wrath of an angry mob when she climbed down.

And now, what happened after the woman tried to walk through the mob calling for her ‘sacrifice’ has been revealed in shocking new footage. 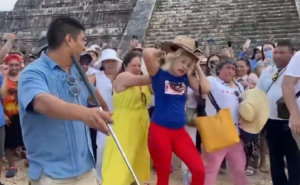 The woman was later identified by local press as 29-year-old Abigail Villalobos – although this was not confirmed by authorities to the Daily Mail.

In the footage of her exit, members of the mob throw water at Villalobos, while others take it a step further and throw actual bottles. One woman even decides to grab Villalobos and shake her due to her deciding to scale the ancient monument, which people have been banned from climbing since 2008.

By the time she reached the bottom, an angry mob was waiting for her and were calling for her ‘sacrifice’ as a punishment.