A TikToker who gave her heart and her kidney — one figuratively, one literally — to her (allegedly) cheating boyfriend is getting a lot of sympathies online.

Colleen Le is making a TikTok career for herself telling the same sob story, and quite frankly, no one can blame her. 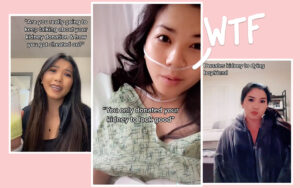 According to Colleen – who is, ironically enough, a graduate in community health science — her boyfriend was diagnosed with chronic kidney disease at 17 and had been on dialysis ever since because his organ was functioning at less than 5 per cent.

Although she doesn’t say how long they were dating, it was long enough for her to get tested to see if they were a match “because I didn’t want to watch him die.”

Got the phone call that changed our lives. WE. ARE. A. MATCH!!…she recalled

Ultimately she went through with it; she even shows off the Certificate of Appreciation from the hospital to prove it.
Fast forward to seven months later, while she’s studying for finals, and her boyfriend/organ recipient tells her he’s going to a bachelor party in Las Vegas “with my church group”. “He was a ‘hardcore Christian so I didn’t worry at all,” she remembered… until he turned up on her doorstep with a confession.

“I’m so sorry babe but I cheated on you in Vegas… please forgive me.”

She said a lot of arguments later, she eventually forgave him and gave him a second chance. Three months after that, he called her with another faith-based update. Told her that if God wanted them to be together, they would be together. Right after that phone call, she got blocked on every social media, stopped answering her calls/texts for months, so she turned to the only avenue left for expressing frustration: TikTok.

The social media star now has tens of millions of views venting the cruel tale on repeat.