This goes without saying, but I feel like Gen Z on Tik Tok are coming up with things that should just never exist ever. Earlier this month, a trend called body slugging came around.

When we tried to read into what it was about, we found out that they were literally just talking about USING LOTION!!!! We had to really read this one nicely to see if we weren’t crazy because we initially thought this was a joke. It was not. We were wrong. 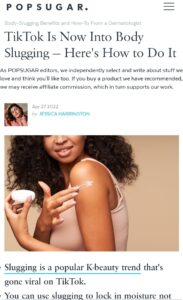 Now there’s a new trend called vabbing and we’re not even going to get into that one. If you don’t know what that is and you’re feeling curious enough to google it, please proceed at your own risk.

I don’t exactly know how they come up with these trends, but as far as I know some things should just be left unknown and some people should just not be allowed on the internet.