Qatari fans were taking of photos of Miss Croatia Ivana Knoll at the World Cup because they disapproved of her outfit.

During Croatia’s opening match with Morocco the model, labelled the World Cup’s sexiest fan, appeared in a red and white bikini top and tight red leggings – catching the eye of many within the crowd. A photo posted after the match showed smiling men in the stadium taking pictures of the 30-year-old model.

Mohammed Hassan Al-Jefairi, a prominent Qatari entrepreneur, claimed the men had been snapping away because they disapproved of her outfit. 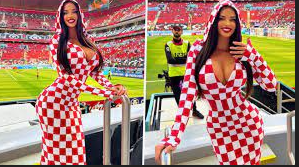 Those visiting Qatar for the World Cup have been advised to cover their shoulders and avoid short skirts, with high fines and even jail sentences for fans who decide to flash their figures.

That’s it, the guy is caught. The wife is waiting at home with a hammer!

Who do think is in the wrong here?