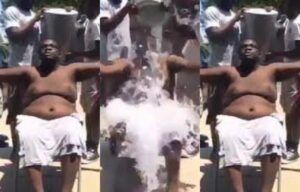 There’s not much to this story except for a video circulating the internet of a man, who’s said to be a pastor testing his faith in Jesus by getting his followers to pour hot water on him.

He’s seen sitting on a chair with nothing but a towel on and although the video does not have any sound, you can see him saying something before he raises his head and spreads his arms out preparing himself for the water.

Two men then walk up behind him with a big container full of what is believed to be hot water. As soon as the water hits the man, he jumps up in shock and runs off trying to make the pain of the hot water go away.

Check out the video below: