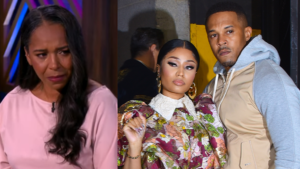 In new court filings, she says she “never offered any money in return for a statement.”

As previously reported, Minaj’s husband Kenneth “Zoo” Petty is being sued by Nicole Hough—and has avoided a $20 million default judgment alongside Nicki—after she claimed that he and Minaj tried to intimidate her into silencing rape allegations against him from 1994. Petty was convicted of the attempted rape in 1995 and served four years in New York state prison.

Hough claimed that Nicki hired associates to reach out and offer her $500,000 to change her story. She also alleged that Nicki is affiliated with a gang. Minaj previously addressed the accusations in a filing last month.

In 2021, Petty pleaded guilty to failing to register as a sex offender when he moved in with Minaj in California and is currently awaiting sentencing, where he faces a maximum of 10 years and a lifetime of supervised release.

This is getting messier and messier.