“Do we have a problem!?” Minaj teased in a tweet. 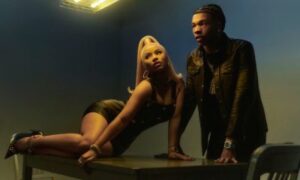 It’s been a minute since Nicki Minaj released a new single, but the drought is almost over. On Wednesday night (Jan. 26) Nicki dropped a tantalizing tease for her upcoming collaboration with Lil Baby, whose title has not yet been revealed.

“DO WE HAVE A PROBLEM!?” Minaj tweeted alongside what looks like a still from a video, in which she is posing provocatively on a table in a black minidress while rocking blonde hair as Baby stands next to her, with both staring at some unseen thing off-camera. “BABY X BARBIE PINK FRIDAY FEB. 4,” she added with a string of emojis, including a unicorn, a red bow, fingers crossed, fire, a tongue, an up arrow and a crying-laughing face.

Minaj, 39, hasn’t dropped a new full-length album since 2018’s Queen, though she did re-release an expanded version of her Beam Me Up Scotty mixtape with some bonus tracks last year, as well as appearing on Jesy Nelson’s debut solo single, “Boyz.”

In September, she also shared a snippet of what sounded like new music on an Instagram Story in which was singing rather than rapping, saying, “Been really enjoying recording again.” She also made a specific call-out for some ringer vocalists to help her out, telling Barbz to, “ask Keke [Wyatt], Tamar & Brandy to redo this. That’s what I sound like in my head.” She later added that she’d like some new generation R&B ringers to come in and help out as well, saying, “Summer, Jhené & Kehlani can be good in the blend as well with their harmonies,”

The rapper has been relatively quiet during the pandemic, telling fans she was pulling out of the 2021 MTV Video Music Awards as well as the 2021 Met Gala over that event’s vaccine requirement. The latter erupted into a social media firestorm when President Biden’s chief medical advisor, Dr. Anthony Fauci, shut down her claims about alleged COVID-19 vaccine side effects, which inspired a torrent of memes.

But really, I can’t wait for what she has for us next week!
(SOURCE: BILLBOARD)