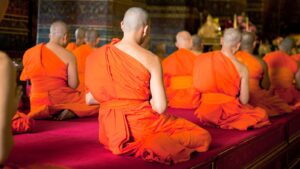 Four monks, including the abbot, in a small temple in a Thai village, have been expelled after a urine test that they had to take came out positive for the consumption of illegal drugs.

Police and health officials raided the place on Monday and ordered the inhabitants to take a urine test immediately.

This put the whole village surrounding the temple in a dilemma as the monks are the very ones they turn to for religious advice and inspiration so for this to happen just puts them in a situation that makes them second guess things that are right and wrong.

Now the temple is empty and the villagers are worried about the many cats and dogs that have called the temple their home.

The monastic chief of the Bung Sam Phan district has been informed about this and has promised to assign new monks to the temple as soon as he can.