Okay so like, this news is almost a week old but I STILL CAN’T GET OVER the fact that they drank each other’s blood right after Colson Baker, stage name Machine Gun Kelly, proposed. Was it romantic? A sick move? I’ll let you think whatever you want to think but one’s thing for sure, they really couldn’t give two hoots about what people on social media was saying about it. Fair enough. 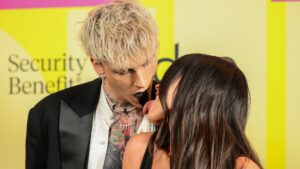 They started dating in 2020 and had revealed that the proposal took place under the “banyan tree” where they fell in love. MGK wrote on Instagram :

Yes, in this life and every life. Beneath the same branches we fell in love under, I brought her back to ask her to marry me

They recently opened up about their high-profile romance, with Kelly explaining how strong their bond really is.

It should be light, but also we go to hell with each other. It’s ecstasy and agony for sure… I don’t want people to think anything’s perfect with us. I didn’t say it was the darkest fairy tale for no reason. I came from broken homes and I watched love never work. Then I grew up wherein pop culture they don’t even make romantic movies anymore. It hurts my soul that I wasted 30 years of my life not having any desire.

I LOVE THIS FOR THEM!