Fans of Mariah Carey are dragging her performance at Macy’s Thanksgiving Day Parade. 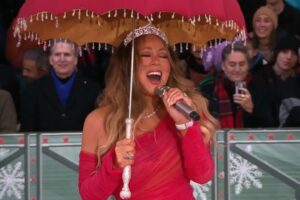 Mariah has quickly been mocked on social media for her “low-energy” performance at this year’s parade. She didn’t even try to pretend to lip sync.

After taking to the stage, fans accused her of ‘forgetting the lyrics to her own song’ with others targeting her ‘terrible lip syncing’.

Mariah Carey really out there delivering the least animated lip-syncing performance of her life.

Video clips are already circulating around social media, showing Mariah standing completely still as she performed her hit All I Want For Christmas Is You.

Why does it seem like Mariah has forgotten the lyrics to her own song? The lip-sync is so whack lmao.

It comes after her disastrous New Year’s Eve performance in New York a few years ago where Mariah blasted production crews.

I’m not even surprised that she’s at it again