A 95-year-old Chinese war veteran recently discovered he had been living for almost eight decades with a bullet stuck in his neck.

After suffering a fall from the balcony of his house, Zhao didn’t report any symptoms to his family. He didn’t feel any pain, but after a while, the World War 2 veteran did start to feel something his neck, so after an X-ray, the foreign object identified as an old bullet. 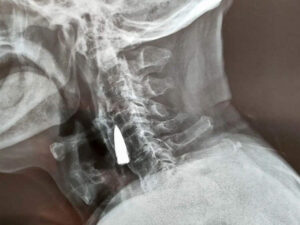 Zhao told doctors after fighting through two wars, he suffered multiple injuries during his time in the army. But he did not remember anything about taking a bullet to the neck.

After examining the X-rays, doctors told Zhao and his family that the bullet was close to some major blood vessels and that since it hadn’t caused him any problems, it was best to leave it in. The war veteran agreed.

This is some x-man type shizzzz!