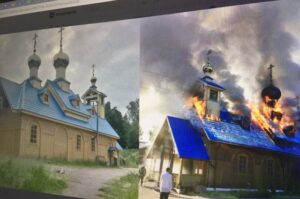 Imagine your wife constantly donating all of your money to her church and you getting so mad about it that you burn down the church.

Well, you don’t have to imagine it because that’s exactly what happened to this man who was fed up with his wife just taking everything that he would earn from his job and taking it straight to the church without question.

He had brought up this issue with her once before and it resulted in a heated argument (no pun intended).

Then they had one more fight about it and things escalated quickly. The man said that he was either going to do something to his wife or he was going to burn down the church.

When the police came to investigate how the church burned down, the initial conclusion was that the building had some wiring problems. It wasn’t until they caught the arsonist that they finally closed the case. The man was more than happy to be turned in and he even begged to be arrested, but the judge told him to wait for his sentencing at home.

With the church burning down, a lot of the members of its congregation took it as a sign to build an even bigger church.

Whatever it is, you have to be on a different level of annoyance for your husband to choose being locked up over being with you in the comfort of his own home.