She’s been staying silent on Tristan Thompson’s new ‘alleged’ lovechild, but a source says that she once “believed that he would change.”

According to court documents obtained by PEOPLE, the woman, Maralee Nichols, is suing Thompson for child support and pregnancy-related fees after she said they conceived a child together in March. She gave birth to the baby boy last week.

The source says Kardashian, 37, “knows about the baby” and confirms that she and Thompson, 30, were together in March. The former couple share daughter True, 3, and Thompson is also dad to 4-year-old son Prince, whom he shares with ex-girlfriend Jordan Craig.

She is just a really great person and wants to see the positive in people. It’s just a sad situation for her. She was just hopeful that he would stay faithful and loyal to her. 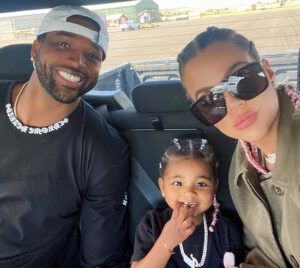 Thompson and Kardashian have been on and off for several years. After briefly reconciling, Kardashian and Thompson split for a final time in June after more cheating rumours. Another source previously told PEOPLE that the exes are continuing to “keep things friendly” for True’s sake.