Japanese fans cleaned up a stadium in Qatar after a 2022 World Cup match their team did not even compete in.

Straight after the opening game between Qatar and Ecuador, Japanese fans stayed behind to help clean up the stadium by picking up bottles and wrappers. 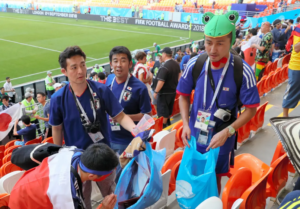 When he asked fans what caused them to clean up they said:

We are Japanese, and we do not leave rubbish behind us, and we respect the place.

After that, the Japanese fans picked up Qatari and Ecuadorian flags that had been thrown to the ground and said that the two symbols “command respect.”

Hats off to the Japanese!! We all could learn a thing or two from them.