I don’t know which one to believe. The fact that these identical twins have a shared fiancé, or that they have set a date on when to make a baby….together!!

In Australia, identical twins who share a fiancé and live identical lives have planned to have children at the same time.

Anna and Lucy DeCinque, 35, share every moment of their day, from eating to showering to dressing to sleeping.

Well I guess Ben Byrne, the twins’ nine-year partner, will have his hands full trying to make the simultaneous conception work lmao.

When she goes to the toilet, I come with her; when she has a shower, I come with her. You name it and we do it. We’re never apart – I don’t think we’d function without each other. 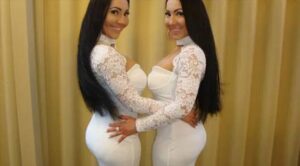 said the twins in an interview with New York Post.

When they are apart, they experience separation anxiety. The world’s most identical twins are so inseparable that they even measure their food portions to make sure they’re the same size.

They’ve spoken up about how tough it is to conceive but as part of their solution, they measure their temperatures together to check their menstrual cycles. Their ovulation cycles have aligned to complement one other as a result of their lifestyle. Even their temperatures are so similar that they reach 36.8C.

They indicated that the method was far more difficult than they had expected, and that aligning the pregnancies at the same time was even more difficult.

But none of the Perth girls, who even go to the bathroom together, will compromise on the synchronization of their ideas.