It has returned to the number 1 spot on the Billboard 200 albums chart for a second non-consecutive week.

Encanto is Disney’s latest successful film. It recently won the Best Motion Picture – Animated award at this month’s Golden Globe Awards where it was also nominated for Best Original Score and Best Original Song. The soundtrack for the film has also been successful. A little over a month since its release back in November, the soundtrack for Encanto checked in at No. 1 on the Billboard 200 with 72,000 album units sold on the chart dated January 15. In claiming the top spot, Encanto dethroned Adele’s 30 after it spent six straight weeks at No. 1 Just a couple of weeks later, Encanto makes its way back to No. 1. 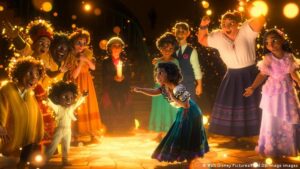 On the Billboard 200 chart dated January 29, the Encanto soundtrack returns to No. 1 thanks to 104,000 album units sold this past week. This number is comprised of 84,000 streaming equivalent album units thanks to 125.33 million on-demand official streams of the soundtrack’s songs. Pure album sales accounted for 17,000 of the soundtrack’s sales total this week. With its return to No. 1, Encanto becomes the first soundtrack since Lady Gaga and Bradley Cooper’s A Star Is Born to spend multiple weeks atop the charts. That project spent four non-consecutive weeks at No. 1 in 2018 and 2019.

Encanto is also the first soundtrack by Disney to spend multiple weeks at No. 1 since Frozen did so back in 2014. The Frozen soundtrack appeared atop the albums charts for 13 nonconsecutive weeks that year.

The Disney animation continues to profit from the popularity of its hit songs, all written by Lin-Manuel Miranda, including “We Don’t Talk About Bruno,” “Surface Pressure” and “What Else Can I Do?” — all of which were in the top 40.