Pete, don’t f*cking do it again

On Friday, news outlets reported that last night’s season finale would be the last SNL appearance from Pete Davidson, who joined the cast in 2014.

Last night’s Saturday Night Live episode was a unique one for multiple reasons. Japanese Breakfast made her debut on the show with performances of “Be Sweet” and “Paprika.” Additionally, it marked the finale episode for the show’s 47th season. However, the most notable aspect of the show was the notable goodbyes that were delivered on the episode. Pete Davidson, Aidy Bryant, Kate McKinnon, and Kyle Mooney all announced that they would not return for the show’s 48th season. With that, they all tried to go out with a bang and Davidson achieved that thanks to his latest and final SNL rap parody. 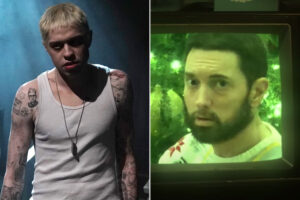 For his latest rap parody, Davidson — who was dressed as Lorne Michaels — took on Dr. Dre and Eminem’s “Forgot About Dre,” making it the third time that he’s rapped over an Eminem song. While the comedian might have had a smooth plan for his latest take on the 1999 track, Eminem himself arrived on set to cut things short. Towards the end of the video, Eminem appeared and essentially pulled the plug on everything. “I would just stop. They all suck,” Eminem said about the rap parodies. “Stop. It’s really bad.” Davidson tried to explain that he was just paying homage to the rapper, but Eminem refused to entertain him.