Rihanna sent fans wild last week when she announced that she is expecting a baby with ASAP Rocky.

The 33-year-old was spotted with a baby bump whilst walking through New York with the rapper at the weekend. She wore a long pink coat which was open at the front, exposing her growing bump which was covered in jewels. Sooo pretty!! 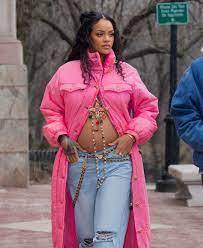 Following the announcement, a rumour is flooding the internet that Drake has unfollowed Rihanna and ASAP Rocky on Instagram.

A rumour is circling Twitter this week that singer Drake unfollowed Rihanna, who he dated in 2009, after her pregnancy announcement.

The tweet went viral and gained almost 20,000 likes, leading people to believe that he really did unfollow her. However, it’s not actually true.

HE HASN’T FOLLOWED HER FOR YEARS

The 35-year-old unfollowed her in May 2018 after Rihanna addressed what happened at the 2016 MTV Awards.

Whilst presenting his ex-girlfriend with the iconic Vanguard Award, Drake confessed his love for her on stage, saying: “She’s someone I’ve been in love with since I was 22 years old. She’s one of my best friends in the world.”

Everyone thought it was a lovely moment between the pair, but not from Rihanna’s point of view.

In an interview with Vogue on May 3rd 2018, she revealed that Drake’s speech two years earlier made her feel “uncomfortable” and said she didn’t like being “put on blast”.

She then exposed that the pair are no longer friends, saying: “We don’t have a friendship now, but we’re not enemies either. It is what it is.”

Not long after, Drake unfollowed Rihanna on Instagram, seemingly confirming to the word that as Rihanna said, they are no longer friends.