We’ve all done crazy things for love. Of course, crazy is a relative term. Some of us give up our favourite food, some of us apparently even get married. And some of us refuse to watch The Dark Knight Rises until 2 months after its release when our partner is finally well enough to go see it with us.

The point is, sometimes love can push the crazy to stratospheric levels. Like this one right here. Next level caaa this kind of proposing.

Alexey Bykov faked his own death in a gruesome car accident as part of an elaborate proposal. 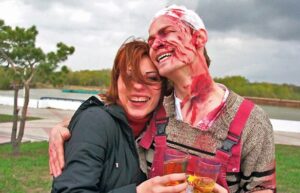 Proposals are hard. Well, they’re not really, but going by the kind of stuff you see on the internet, if you’re bending the knee, you’re in for some serious competition. Just a simple Google search and you’ll find Harry Potter proposals, Game of Thrones proposals, flying proposals. Some guy even got 48 of his friends to dress up as carrots for a proposal.

But we’re not exactly sure what inspired Alexey Bykov to pretend to kill himself first, get his girlfriend to bawl her eyes out, and then get down on one knee to ask her to spend the rest of her life with him.

And it wasn’t half-assed. The man hired a movie director, stuntmen, make-up artists and a scriptwriter to make a convincing accident scene.

His reasoning for it all?

I wanted her to realise how empty her life would be without me and how life would have no meaning without me.

That madaga he spent money on this proposal. Imagine the wedding. Too good this guy.