When Henry Cavill was casted as the Supernatural hunter Geralt of Rivia, we couldn’t imagine a world where he wasn’t the Witcher. Well looks like we have to start imagining that day.

Netflix announced that The Witcher will be back for a fourth season. However, it wasn’t all good news, as the streamer also confirmed that Cavill will not be returning for season 4. Instead, Liam Hemsworth will be the new monster slayer.

Netflix’s live-action adaptation of the popular Witcher books first started airing in 2019 and quickly exploded in popularity, with many praising Henry Cavill’s stoic but charming take on the white-haired witcher himself, Geralt. Since that first season, The Witcher has become a bonafide franchise for Netflix, leading to more seasons, anime prequels, movies, and even a child-friendly spin-off. But the star of the original series won’t be sticking around as the fantasy franchise grows.

It’s official: The Witcher is returning for Season 4, and Henry Cavill will be handing his swords to Liam Hemsworth as the new Geralt of Rivia after Season 3. Welcome to the Witcher family, @LiamHemsworth!

Henry Cavill is such has gone on his socials to cheer his Aussie replacement. 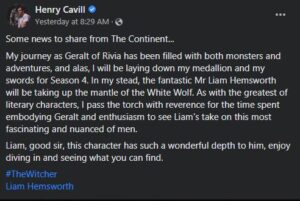