BTS has another major accolade to add to their list of achievements. On Thursday (Feb. 24), the International Federation of the Phonographic Industry (IFPI) — the official organization that represents the recording industry worldwide — announced that BTS has earned the global recording artist of the year award for 2021. 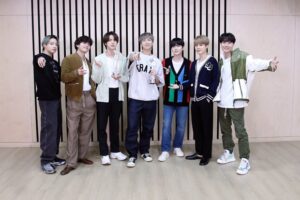 The Grammy-nominated K-pop group is now the first act to win the global recording artist of the year award for two consecutive years; they also earned the title in 2020. Taylor Swift and Drake are also two-time winners of the award, but their wins were not consecutive. According to the IFPI, the honor is a culmination of an artist or group’s worldwide performance across digital and physical music formats, including streaming and vinyl, and spans their entire discography.

“BTS’ phenomenal success over the last year is a testament to their creativity, hard work and ongoing commitment to continuing to find ways to bring their music to the world,” Frances Moore, chief executive of IFPI, said in a statement. “By performing in three different languages, they demonstrate their extraordinarily unique global appeal and their dynamic and passionate fanbase has helped to make them the first artists in history to top the Global Artist Chart in two consecutive years.”

He continued, “We would like to wish RM, Jin, SUGA, j-hope, Jimin, V and Jung Kook and all who work on their team huge congratulations on winning the Global Recording Artist of the Year Award and on another year of brilliant success.”

The 2021 global recording artist of the year award comes after BTS netted three No. 1 hits on the Billboard Hot 100 last year — “Butter,” “Permission to Dance,” and “My Universe,” their collaborative track with English rock band Coldplay. Each track peaked at No. 1 on the all-genre chart, with “Butter” spending 10 of its 20 charting weeks in the top position.

Coming up for the K-pop group is a brief stint in Las Vegas, with a series of four shows taking place at Allegiant Stadium, home of the Las Vegas Raiders, April 8, 19, 15 and 16.