The Man, The Myth, The Legend is retiring.

The family of Bruce Willis has announced that the 67-year-old will be taking a break from acting after being diagnosed with aphasia, a condition that hampers reading, listening, hearing and most cognitive and motor skills that otherwise would be necessary to lead a normal working life. His condition has been deteriorating for a while with some directors and other crew members who have worked with  Willis noticing that he had been struggling to remember the dialogue, expressing confusion at his surroundings, needing shortened work days and having issues with gun use and action scenes. He is honestly one of my favourite actors and it breaks my heart to hear that he won’t be making any blockbusters now. No surprise he’s one of the best actors in Hollywood, been nominated for five Golden Globes, winning one for his movie  Moonlighting, and three Emmys, winning two. He’s also one of the biggest action heroes of this generation with kids everywhere hoping to grow up to be just like him. He’s starred in some of the biggest movies of our generation, such as the Die Hard series and Surrogates amongst these and his movies alone have grossed almost 5 billion internationally. 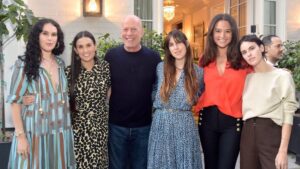