US rapper Travis Scott is facing legal action after at least eight people were killed and hundreds injured at his Texas festival Astroworld. One injured concertgoer has accused Scott and surprise performer Drake of inciting the crowd and is seeking 1 million US dollars in damages.

Neither has commented on the lawsuit.

Scott said he was working to help the families of the victims – the youngest of whom was just 14.

Tributes have been paid on social media to those killed. 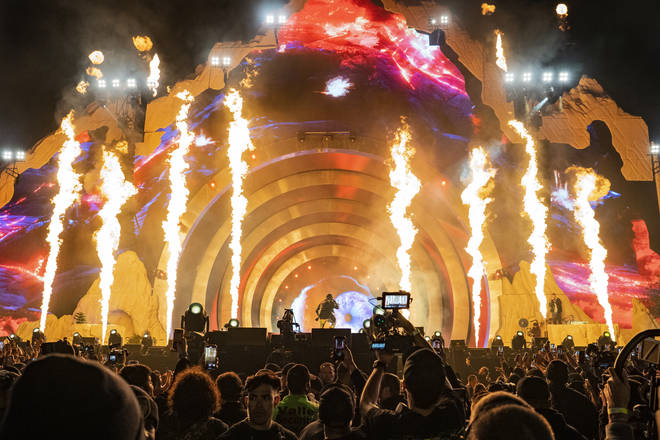 Kylie Jenner is “broken and devastated” following the tragic deaths at Astroworld Festival. The 24-year-old star was watching her boyfriend Travis Scott perform at his event in Houston, Texas when a crowd surge left many people injured and eight dead and the beauty mogul has sent her “thoughts and prayers” to all the victims.

She said in a statement shared to her Instagram Story:

“Travis and I broken and devastated. My thoughts and prayers are with all who lost their lives, were injured or affected in anyway by yesterday’s events. “And also for Travis who I know cares deeply for his fans and the Houston community.”

Kylie was criticised for sharing videos from the event, which she later deleted, and the pregnant star – who was there with her sister Kendall Jenner, and her and Travis’ three-year-old daughter Stormi – insisted neither she nor the ‘Sicko Mode’ hitmaker had any idea of the scale of the tragedy t the time.

“I want to make it clear we weren’t aware of any fatalities until the news came out after the show and in no world would have continued filming or performing. “I am sending my deepest condolences to all the families during this difficult time and will be praying for the healing of everyone who has been impacted.”

“I just want to send out prayers to the ones that was lost last night. We’re actually working right now to identify the families to assist them through this tough time. My fans really mean the world to me, and I always want to leave them with a positive experience.”

Travis stopped his performance at NRG Park in order to ask for help but admitted he “could never imagine anything” like the tragedy happening.

“Any time I can make out anything that’s going on, I’d stop the show and help them get the help they need, you know? I could never imagine this situation.”

The ‘Highest in the Room’ hitmaker and his team have been “working closely with everyone to get to the bottom of this — City of Houston HPD, fire department — everyone, to help us figure this out” and he told fans to contact authorities if they had any information.

“Everybody continue to keep your prayers. I mean, I’m honestly just devastated and I could never imagine anything like this happening. I’m going to do everything I can to keep you guys updated and keep you guys informed of what’s going on. Love you all.”