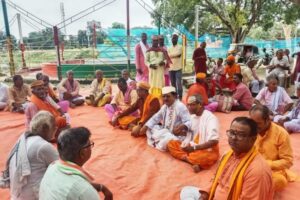 Imagine telling your family that you’re going to the market, but instead of buying groceries, you were actually going to buy a husband.

This groom market has been selling potential husbands for 700 years and even though it isn’t as popular as it was a couple of decades ago, bachelors are still known to travel hundreds of miles to this market in hopes of being purchased by a decent wife.

Women usually already know what type of husband they’re looking for when they come to the market with engineers, doctors, and government workers being some of the popular types of husbands to be purchased.

The most popular category of husbands, however, is the really young grooms.

I think the only downside to this whole exchange is the bride doesn’t even get the last say when it comes to the finer details of the purchase.

Her family will most likely go with whoever is in their price range as well as has an impressive resume.

Even though the grooms are being bought, they will still demand a sizeable dowry from the woman and her family and although this is illegal in most parts of India, it is still accepted as a gift from the bride to the groom.