A woman who is marrying a ghost claims no church will have the couple and they are being ‘threatened with exorcism’ by priests. 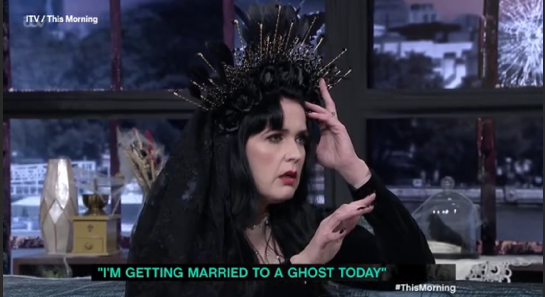 Singer and songwriter Brocarde first met her deceased fiancé Edwardo last year, when he made a surprise appearance in her home.

Edwardo and I are currently arguing over the wedding date, for weeks, we got nowhere with it, so I’m going to design a Oujia board of wedding dates, to see which we are both drawn to.

Brocarde and Edwardo communicate through unusual means. The ghost often sends cryptic messages in the shower.

Edwardo has made a few appearances but there’s an overwhelming sense that he doesn’t feel comfortable in churches, it’s far too risky for him.

Brocarde claims that some priests do believe in the paranormal, but they can’t publicly speak about these beliefs.

The couple are inviting a series of celebrities, including the ghosts of Marilyn Monroe, Elvis and The Bard.

The duo has some very romantic plans for Valentine’s Day, but Brocarde is slightly annoyed that she has to pay for everything.

The thing that really annoys me is that I will be left footing the bill, but he is a cheap date, as he doesn’t eat or drink in public.

Makes us wonder, what would you do if you happen to come across this woman dining & conversing with her lover (a ghost)?

She may look like a crazy woman, but little do you know …she’s actually on a date.