If you found out that your partner was cheating on you, you would expect some kind of explanation.

It’s so frustrating when you get the “silent treatment”, but what can you expect when your partner is a rag doll.

Meirivone Rocha Moraes, who lives in Brazil is devasted after finding out her lover, a rag doll named Marcelo was having an affair.

The couple has three kids- Carol, Diego, & their newborn. 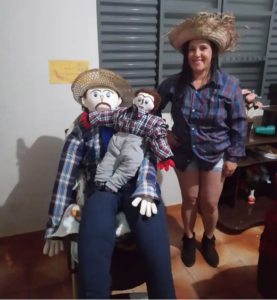 I was very sad, and I could barely sleep because I love my husband so much, but he denied the betrayal. I found out through a friend who told me that she saw Marcelo entering a motel with another woman while I was hospitalized for three nights and three days with Marcelinho, our son, who had a virus

Meirivone thought her friend was lying, but then she started looking through his phone and saw the conversations which made her sure that he was cheating.

Meirivone told Marcelo to sleep in the living room, as she didn’t want to stay in the same room due to the betrayal. She adds that she needs to talk with him, so he can decide once and for all that he won’t cheat anymore and if he does one more time, she won’t forgive him!

With all due respect, she’s expecting too much from her husband. I mean she wants him to explain “why he cheated ?!”, that’s probably way beyond his capabilities WOMAN.