Selena Gomez appears to have fallen out with her former best friend and kidney donor Francia Raisa, with the rift spilling over onto social media over the weekend.

The Disney star, 30, was gravely ill with lupus when fellow actress Raisa, now 34, offered to donate her kidney and they underwent the difficult transplant process in 2017.

Gomez detailed her health struggles in her just released documentary, My Mind & Me, but gave no mention of Raisa and in a recent interview in Rolling Stone, Gomez named Taylor Swift as her only celebrity friend in the industry.

Francia unfollowed Gomez on Instagram following the release of documentary and was so irked by Gomez’s quote about Swift that she branded it ‘interesting’ in the comments section of an E!News post.

And on Sunday, Gomez left an eyebrow raising comment underneath a TikTok video that discussed how her Raisa unfollowed her in the wake of being snubbed in the documentary.

Selena wrote in the comments, shocking her fans in the process.

Sorry I didn’t mention every person I know

Gomez claimed last week that she only really had one close pal on the Hollywood scene, and discussed her friendship with Swift.

I never fit in with a cool group of girls that were celebrities.

My only friend in the industry really is Taylor,

the Only Murders in the Building star told Rolling Stone magazine last week.

Gomez also spoke about receiving a kidney to Rolling Stone, however her quotes did not mention Raisa being her donor.

Justin Bieber’s ex also gave a candid look into her health battle in her documentary, at one point breaking down into tears as she struggled with her lupus symptoms worsening.

Selena and Francia have been friends for over 10 years and have even referred to each other as ‘sisters’ in the past.

In July, Francia discussed how she’s had to alter her diet, after she donated a kidney to Selena, who suffers from Lupus – an autoimmune disorder that causes the body’s natural immune defenses to attack healthy tissue.

Because I have one kidney functioning and it acts as a filter to my body, I can’t consume as much protein. I eat a lot — I know I’m skinny, but I chow down — so that was a very huge concern for me when I talked to the doctor,

When she announced the gift of life on social media, Selena shared a picture of herself and Francia is adjoining hospital beds writing a heart-felt thank you. 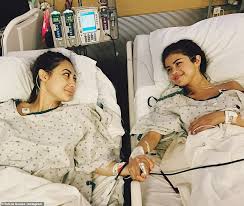 There aren’t words to describe how I can possibly thank my beautiful friend Francia Raisa,’ Selena wrote. ‘She gave me the ultimate gift and sacrifice by donating her kidney to me. I am incredibly blessed. I love you so much sis.

At the time the duo also did a joint interview on the Today show, with Gomez detailing just how dire her health situation had been.

My kidneys were shutting down. My mentality was to keep going. She lived with me during this interesting time where my kidneys were just done. That was it, and I didn’t want to ask a single person in my life. The thought of asking someone to do that was really difficult for me. She volunteered and did it. And let alone someone wanting to volunteer, it is incredibly difficult to find a match. The fact that she was a match, I mean that’s unbelievable. That’s not real.

Both Francia and Selena, said they ‘went through depression’ post-surgery, according to Self. Francia said it was difficult for Selena because she had complications after the surgery, where her kidney turned around inside of her body and she needed to have emergency surgery to correct it.

Francia said that after surgery, she received a text message Selena that said: 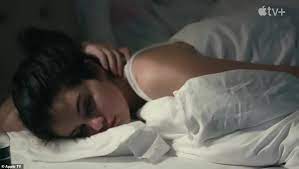 She explained: ‘That’s when she got the complication where the kidney turned and broke an artery and she had to go back in and they actually had to take a vein from her leg – so she has a scar right here [pointing to her inner thigh] and build a wall around her artery.’

At the time Francia also showed her scars, which included two on her stomach and one below her belly button. 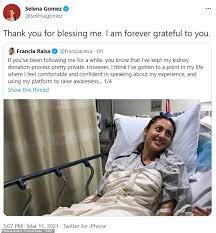 The songstress also defended Francia after a tasteless joke was made about who really donated the kidney in Saved by the Bell reboot in 2020. The joke was later cut out due to the backlash.

I am not sure how writing jokes about organ transplants for television shows has become a thing but sadly it has apparently. I hope in the next writer’s room when one of these tasteless jokes are presented it’s called out immediately and doesn’t make it on air.

But just a year after her kidney donation, the two were said to be feuding, with Francia taking an issue with Selena’s

and her consuming alcohol following the surgery.