A viral video of an animal chiropractor cracking the neck of Rottweiler has captured hearts around the world.

German chiropractor and osteopath Murat Colak caught the moment on camera as he rotated Hailey the Rottie’s neck multiple times before resetting it with a quick flick of his wrist. While the sound of the dog’s neck cracking isn’t great, the very good girl’s reaction definitely is. 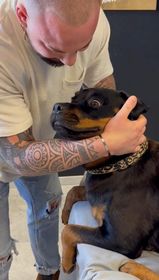 On TikTok alone, the video has already gained more than 92 million views.

So awesome! The reaction was priceless.